My Granola Ways Are Surfacing Again!

Are you wondering what I mean by "granola"?
You probably have a good idea!
It is what I call all the hippie earthy Birkenstock people.
You know the West Coast kind of "hipster."
Although I am not fond of Birkenstocks, 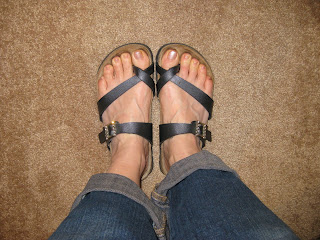 I do wear them because they are so good for the feet.
Mine have a little bling, though!


I just remember the girls who wore Birkenstocks seemed to have a lot of  hygiene problems.


It all started for me when we lived in Prescott, Arizona a very granola-esque place in the USA. A lot of old hippies turned New Agers retired there. You know, rocky mountain high, John Denver, crystals and all.  I had always been interested in being healthy, since I lived near the California salad-eaters my whole life.


So when we moved to Prescott these are the of kind of people I was trying to befriend. ("Unto the Jew I became a Jew...") I even went grocery shopping at Super Carrot!


One time while I was shopping there, my baby Jed was crying and the sales clerk asked if she could give the baby some "flower essence" to calm him! She gave it to him, and it didn't work (neither did the acupuncture which they said would induce labor...when I was pregnant the next time. But that is a whole different story.)


While we were living in Prescott, I needed to supplement my breast milk as my baby got older, but I didn't want to use formula. I found a recipe for making a nutritious, balanced baby formula from goat's milk, carrot juice, and other stuff that I can't remember now. Jed loved it! And we (not Dave) loved drinking goat milk too!


Dave use to teased me about preaching the gospel of health food all over Arizona. That all fizzled out when we moved to the south. Wow, was that a culture shock! We were very poor, and there wasn't anything like the Super Carrot here. Remember "unto the southerner I became a southerner, ya all!"


Fast-forward to 2011. I was given a sample of Jennifer Shipp's goat's milk. I loved it! I called Jennifer and asked how I could get some. She told me the only legal way to buy raw goat milk was to buy a share of her milking goat. That way we would be drinking our own goat's milk. I now own a piece of a goat!  Even better, I don't have to feed it or milk it! The Shipp girls do that part (thank you, girls!!!)


When I told Dave what I did, he thought we should have the right to give it a name, since it was our goat. I reminded him that the goat already has a name, Ivory, and its last name is Shipp.


So Dave decided that we could give the goat a middle name. And he wanted to name the goat after me! Teresa! I protested, but Dave thought I should be delighted, honored, and flattered to have a beautiful goat named after me.


Dave can't wait until Sarah and Lauren learn what we have done. He thinks they will be so happy!


He is also thinking about other ideas for Tesarla... Like an entire line of Tesarla products to sell on EBay, or maybe even Tesarla Day, which shall be celebrated each year on the day after Valentines Day, when everyone will propose a toast with goat milk in canning jars, and wear something angora with their Birkenstocks.