My cousin Jody Davis from the Newsboys was in town on Sunday for the Winter Jam Tour. 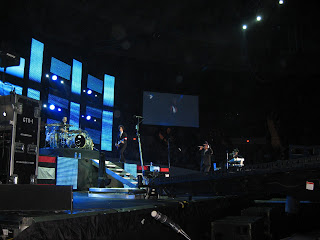 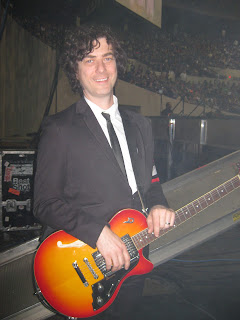 I didn't get a hold of him earlier in the week and he wasn't answering my texts, but I decided to go anyway and hope that I could still get in to see him somehow. Where there is a will, there must be a way!

It was a totally sold out concert and I had to park blocks away. When I arrived there was a mob of people waiting to see if they could still get in (the fire marshal can be so picky about overcrowding!). I did manage to talk my way in without paying, but Jody still wasn't answering his phone. Even his wife couldn't get a hold of him. I had to use my best salesman-like skills and just plain ol' mom-will-not-be-deterred skills in order to get in!

While I was waiting I ran into some girls from church and I had a nice time chatting with them. Christy remembered me being related to Jody, because last year Christy was a volunteer worker at the concert and she saw us then.

One of the girls said, "oh, is Jody your nephew?"

Now this doesn't seem like a loaded question, but it is similar to someone asking your sister if she is your mom.

Nephew! Sorry Jody this might not be good for your career, but Jody is my cousin! We aren't spring chickens anymore! I will tell you that I am older than he is, but he is the same age as my sister.

Tait had a similar story happen to him, except it was his sister Lynda that was asked if she was Tait's mom! Yikes!