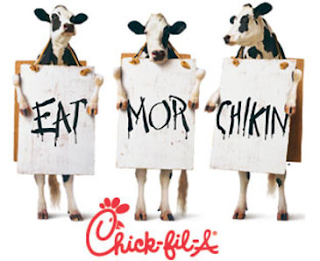 I read this in Biola's magazine that we receive, because Dave is an alumnus, and I just thought you would be interested. It is such a good reminder that everyone plays a part in bringing God to this world, not just the missionaries overseas.


"You can make your work an act of worship, and God called me to the marketplace. He called me... to impact people's lives selling these little chicken sandwiches. ...But [selling chicken sandwiches] is not our end game because that's not his end game. His end game is changed lives: people that have a relationship with him. That's what he wants to do, is reconcile this kind of world with a personal relationship with a son who died for you and I, who loves us so very much."
Dan Cathy, president and chief operating officer of Chick-fil-a, speaking on his company's business practices at Biola's second annual Imagination Summit on April 15, 2011.


Dan Cathy, president and chief operating officer of Chick-fil-A, believes wholeheartedly in the company’s corporate purpose statement: "To glorify God by being a faithful steward of all that is entrusted to us. To have a positive influence on all who come in contact with Chick-fil-A."
Cathy plans to visit Utah next week, spending time at some of the company’s 12 Utah restaurants, speaking at various events and talking about the two newest eateries, which will likely open in Sugar House and Layton in September. Expect him also to discuss the importance faith has played in the business.
Since Cathy’s father, S. Truett Cathy,founded Chick-fil-A Inc. in the 1960s, the Baptist family has prided itself on running Chick-fil-A under religious principles. The restaurants are closed on Sundays, employees participate in optional, weekly devotionals and it’s not unusual for Dan Cathy to carry a New Testament in his pocket as he goes about his day. (Salt Lake Tribune, July 21, 2011)
Posted by David Rieke, DMin at 9:39 AM