My Trip to Arizona 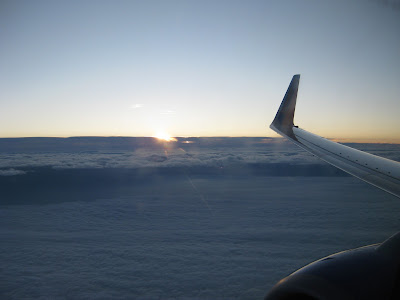 This past week I was able to travel to Arizona for my mom's surprise birthday party. A friend of ours was so generous and gave me their United Airline vouchers. I was able to make reservations and leave within two days!

I usually fly on South Worst Airlines (not really bad.... really). This was quite the treat because United provides a movie for our viewing pleasure. I remember when you had to pay $3-$5 to get the head phones in order to hear the movie. Not anymore. It is free! The head phones are in the seat pouch with the magazines and barf bag. I used my own ear buds from my ipod. Who knows what kind of weird germs or bed bugs or ear wax are on those things! eeeww!

It really did help pass the time, since the 4 hour flight I was on was completely full, and I was in the middle seat between two men. It wasn't so bad, because the guy on the right was older and slept most of the time, but he really needed to brush his teeth. The guy on my left was sort like a cross between Monk and some other guy I know but can't say. Anyway, he didn't want anything to do with anyone. He put on his own very large earphones and read his notes the whole trip.

So all in all it was a good trip. Just for clarification, I don't like to talk a lot because sometimes I get airsick and just need to sit still. Not because I am anti-social.

The free movie wasn't the only thing that has changed. The seats are soooo very close together now. I couldn't even get my bag to fit between the seats to put it on the ground. My legs are short so it wasn't a big deal, but I am sure it would be uncomfortable if I was 6 feet tall! And there is the added $25 each way for every suitcase that is checked-in.

I traveled through Chicago O'Hare airport. I like O'Hare. Even though it is a huge airport, the bathrooms were so clean! There was a cleaning lady stationed in the bathroom! And the toilets were the greatest! 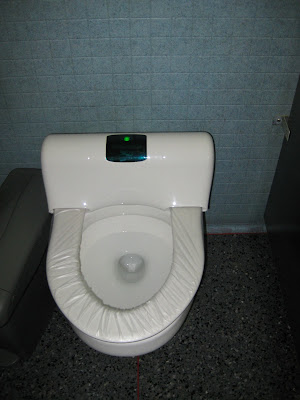 The floors were completely free from water and toilet paper debris.

It even smelled fresh! It looked so clean that I actually breathed threw my nose. See, normally I start breathing though my mouth so I can't smell anything when I get grossed out.

Public bathrooms gross me out! But airplane bathrooms even more!!

Okay, so this is the best part - you wave your hand in front of the green light and a new toilet liner swirls around! And then digital letters pop up and say "clean." Isn't that wonderful! I actually sat down. Well sort of, but it was such a nice treat to have a clean bathroom!

Dave had to spoil it all. His idea was the same plastic just keeps circling around and everyone just thinks it is new and clean. eeewww!
Posted by David Rieke, DMin at 12:12 AM