Jed and Lauren try and come to our house once a week for family night. We use to have it on Tuesday nights, but with iD group, Luke’s work and Dave teaching an evening class at church on that night, we decided that Monday nights might be a better choice. I relish this special time with my children! We had missed being together the past week, so on Monday, January 20, I was so ready to enjoy the life they bring into this ol’ house!
About the time we were finishing dinner, Lauren said, “I want to play a game.” I love to play games, and I can rarely get my man or my man-children to play a game with me, so I love having daughters (via daughters-in-law). Lauren said she wanted to play Apples to Apples. I didn’t think I had that game, and Jed said that he thought I did, but it didn’t matter, because Lauren had the game in their car. The dishes were swiftly put away, and the game set out. Since it was early enough, Luke was able to play with us for a while before he had to leave to go to a Bible study he attends on Monday nights.

It was Dave’s turn to flip over the Apples to Apples topic card and pick the best response from each of the other four players. The topic was “Loveable,” and everyone turned in the card in their hand they thought fit best with the topic “loveable.”

The “Apples to Apples” game includes four blank cards that players can use to fill in their own nouns or adjectives—to sort of personalize the game.  As Dave was reading the handwritten card that Lauren turned in, he saw something like, “Loveable: Eli or Elle Rieke.” Instead of reading it out loud to everyone, he said, “What does it mean?” Luke and I were thinking like, “What do you mean, ‘what does it mean?’” And Jed and Lauren just looked amused. And Jed told Dave to read the other handwritten card. It said, “Baby Rieke, loveable, adorable, cuddly.” Then Dave pulled out the card for me to see, and again said, “What does it mean?”

I was confused, too. We have played the game before and I knew we had already written on the blank cards, but I couldn’t remember why we would have written these particular words on the cards sometime in the past, and I hadn't seen anyone write on any card this evening.

Dave asked him something like, “Is that really it? Are we going to have a baby?” And Jed and Lauren nodded with big smiles. And the celebratory cheers, squeals and hugs began. Well, I was the only one who squealed, ‘cause boys don’t squeal!

I wish you could have seen the look on Jed and Lauren’s face. They were glowing! They were so cute as we enjoyed their clever surprise!! 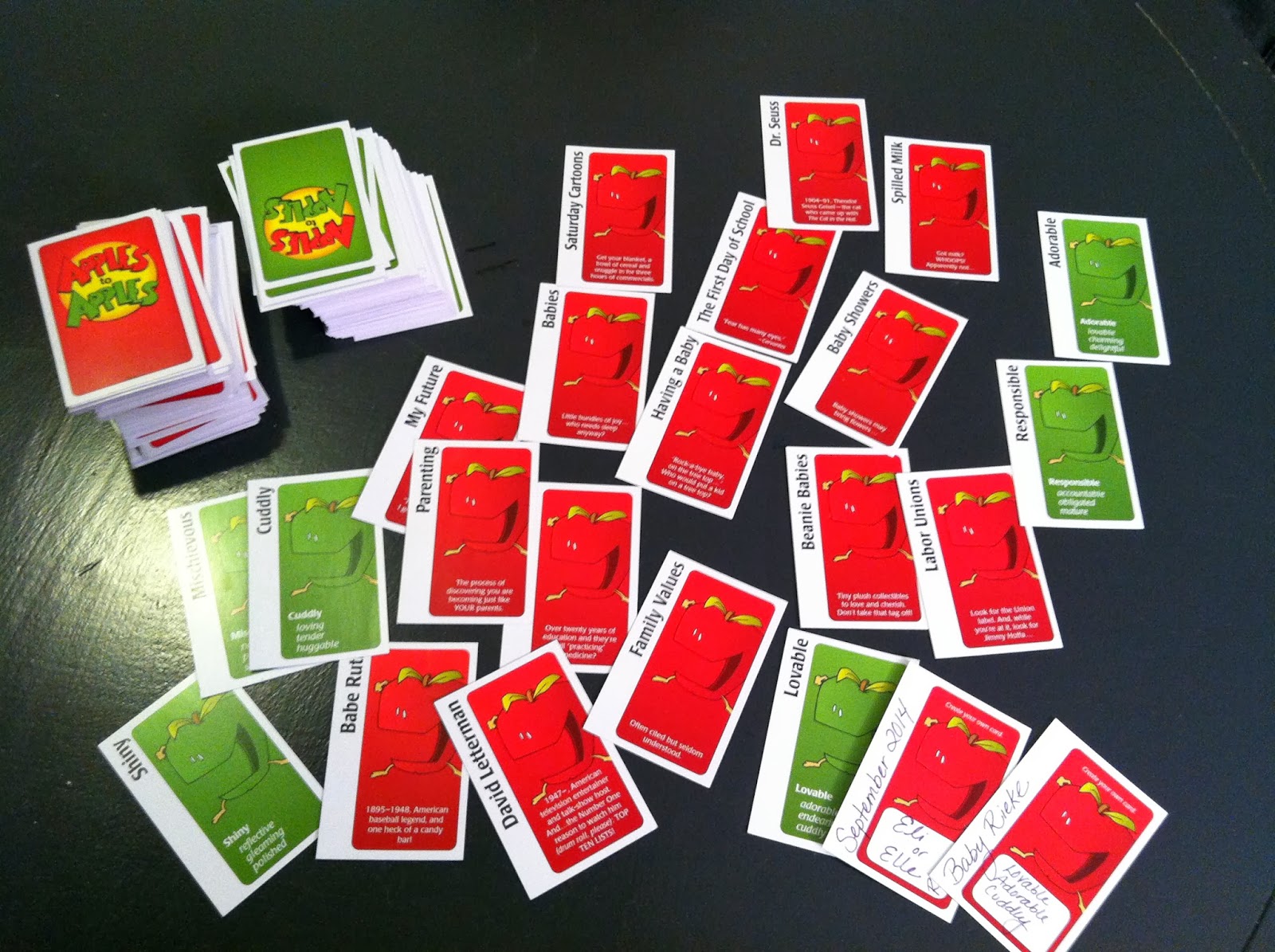 They had it all planned out before them came over. They had pulled out all the right cards about babies, cuteness, child birth etc… Even if we had the game, Jed was ready to stack the deck with his pre-planned cards. I didn’t catch on at all. Later they told us they really hadn’t counted on Luke playing, so it rearranged the cards just a bit. The cards in my hand had nothing at all to do with babies, and I think that is what kept me from catching on even a little bit.
I was thoroughly surprised and delighted! My heart is overwhelmed with gratitude!

They had to be extra creative, because the original plan was to send us a little gift in the mail. 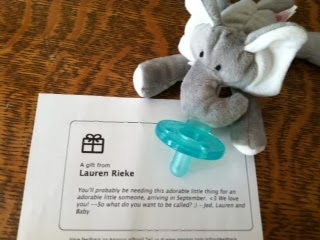 Lauren told me earlier that they were expecting a package, and she had asked earlier that day if it had arrived yet. It had not, and I said it was probably because of the snow. The real deal was that Sacha and Julie, and LeVon had already gotten the gift that afternoon, so they already knew the surprise. They needed a different way to surprise us! I think they were so excited for us to know too!!

Several days later, the package finally arrived. Now this special little elephant sits in my living room where I can look at it everyday.

I can’t explain the special feeling I have as I look into my children’s eyes. Jed is going to be a daddy! Lauren is going to be a mommy!! I am on cloud nine! Just the Sunday before, I was sitting next to Lauren and Jed in church and my heart was overcome with a desire for Jed and Lauren to have a baby. What a better place to pour my heart out to the Lord than during worship at church with my church family. I had no idea that Jed and Lauren were even trying to have a baby, nor did I tell anyone of my crazy prayer. Little did I know, our little Eli or Elle was already on the way.